There is so much bullshit in our business that sometimes you have to wonder where it all comes from. Yesterday I decided to "peel back the bullshit" and see if I could reconstruct how something that was completely wrong wound up being represented as a fact in reputable publications like Forbes and The Drum. Here's the story.

Yesterday Samuel Scott tweeted out a quote from an opinion piece in The Drum. 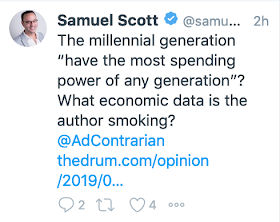 Anyone with half a brain knows that millennials are nowhere near having the most spending power. In fact, on a per capita basis they have the lowest spending power of any adult group. People over 50 control 70% of the wealth in the US, and are responsible for about half of all consumer spending. 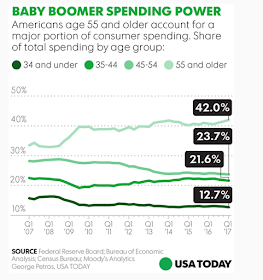 So I decided to do a little detective work and try to figure out where this bullshit "fact" came from. In doing so, I got a nice close-up look at the astounding ignorance that is embedded in our industry and how bullshit, repeated with enough frequency, becomes a fact.

I started with the piece in The Drum. It was called "Why direct-to-consumer companies are using Influencer generated content to win over the market." It was a thinly disguised self-promotion piece full of the usual data hysteria. As noted above, the piece claimed that millennials "have the most spending power of any generation."

As justification for this claim, the article linked to this article in Forbes entitled "How To Tap Into The Millennial $200 Billion Buying Power With Social Media" which asserted that "By 2018, they will have the most spending power of any generation."

The article offered no back-up for this claim other than a link to this thing called "41 Revealing Statistics About Millennials Every Marketer Should Know." This piece lived on an agency website, was written by someone who was two years out of college who called herself a "Marketing Strategist." The marketing strategist had this to say...

Once again, there was no back-up for this claim other than a reference to something called "Bazaar." Searching for this source lead me to a pdf from 2012 entitled "Talking To Strangers: Millennials Trust People Over Brands" by a company called Bazaarvoice that sells some kind of software for harnessing the power of "user generated content." (Remember that?)

Once again, there was no detail or proof, just this assertion...

The attribution for this claim was a footnote about a book...

The book in question was published in 2009 and was one of those "millennials are a new species" things that were all the rage until it turned out that millennials were pretty much just like everyone else. I couldn't find a direct claim in the book (frankly, I didn't look very hard) that "millennials have the most spending power of any generation." The closest thing I found was this:


"Generation Y, those born between 1978 and 2000 has overtaken baby boomers in sheer numbers and is poised to do the same with its incomes by 2017..."

Here's a graph that demonstrates that income per capita among baby boomers is far higher than millennials. 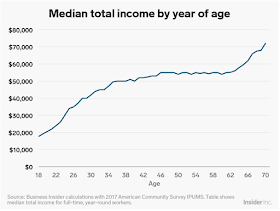 One more thing. Even if millennials had higher income than baby boomers, that still doesn't mean they would have "the most spending power." Spending power is not a function of income. It is a function of income plus accumulated wealth plus access to credit. According to the Federal Reserve, baby boomer wealth is more than 15 times greater than that of millennials (which means they also have way more access to credit.)

So let's recap the timeline.

- In 2009, a book incorrectly predicted that millennial income would surpass baby boomer income by 2017.

- In 2012, in a self-promotional pdf by a software company, this false prediction was misinterpreted to mean that millennials would have "more spending power than any other generation" by 2017.

- In 2017, a piece of "content" on an agency website, written by a "marketing strategist" two years out of college, used this quote from the software company to assert that millennials "will have the most spending power of any generation by 2018."

- Later that year, an article in Forbes used the assertion on that agency website to justify a claim that, "By 2018, they (millennials) will have the most spending power of any generation."

- And yesterday, in 2019, an article in The Drum leaning on the piece in Forbes, proclaimed that millennials "have the most spending power of any generation."

And that, my friend, is how in the slovenly and slipshod world of marketing, bullshit becomes a fact.
Share