Lies Of The Marketing Industry

The marketing industry is guilty of 10 years of lying by omission.

I am specifically speaking about the events at which the marketing industry comes together -- our conferences. These are the occasions when the industry "gathers" and "networks" and "shares" all the dumb shit that we happen to be obsessed with at the moment.

It seems that there is a new marketing conference every half-hour to solemnly explore whatever the marketing fad-of-the-month happens to be. The trade press, finding it ever harder to make a buck publishing, has jumped head-first into the conference business with a never-ending stream of "insider summits."

The problem with these conferences is that while they pretend to be educational, they usually have a hidden motive that is antithetical to truth-telling. In fact, most of the conferences you attend are financed to a significant degree by companies with an agenda. And what is the undercurrent that defines that agenda? Usually, the propagation and glorification of marketing and advertising technology.

The headline speakers at these conferences are often cheerleaders for whatever new technology is at hand. The talks are usually boosterism disguised as information. Dissenting points of view are rarely represented. The result is that we have become an industry that has lost its traditional sense of skepticism and does not even know what questions to ask when force-fed the latest techno-bullshit.

Do you think Facebook and Google want people at the conferences they are sponsoring to talk about the horrifying dangers of tracking and surveillance marketing? Do you think the adtech industry - whose members sponsor scores of conferences - want speakers spelling out the facts about the waste, fraud and corruption enabled by adtech? If you were paying good money to sponsor a conference would you want people onstage describing what a stupid, dangerous product you were creating? Let's not pretend the conference organizers don't understand the unwritten rules. Let's not pretend they don't book these conferences accordingly.

Here is a list of the so-called "Gold Partners" for this year's Advertising Week conference in NYC...

You don't have to be a philosophy major to figure out what segment of the ad industry is being advanced by this conference.

And who's going to be speaking at Advertising Week? Do you think Google will have a speaker at the conference? No, they'll have at least eleven of them... 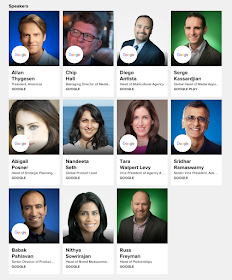 Isn't anyone embarrassed that one company has eleven speakers at a conference? Have we gone so far down the rabbit hole that no one thinks this unseemly? And people are willing to pay good money to witness this?

I get invited to these conferences once in a while because I get cast as the amusing, slightly nutty old guy who thinks adtech is a bunch of dangerous horseshit. You know, comic relief.

These things are usually just a 3-day festival of self-congratulation and cheerleading for the stinky online ad industry, the dubious operators who serve it, the "futurist" baloney peddlers, and the gullible suckers who pay to suffer through it.

Adtech corrupts everything it touches.

Where Is The Universe?

The idea seems strange as we have always defined the universe as everything there is. But I guess it is no stranger than quantum theory or any of the other barely comprehensible theories that modern physics has spawned.

And while we're at it, if there are a multitude of universes and each one created its own space, that must mean that there is no common medium in which all the universes exist. So where the hell is our universe? No wonder I can't find my sandals.

When you figure this out, tweet me the answer.


One of my favorite marketing gags is the one in which marketing people take a huge creative success and attribute its success to some horseshit marketing process that was completely irrelevant to the idea.

Such is now the case with the famous "FCK" ad for KFC. Here's a quick recap for those who haven't seen it: KFC had a major delivery screw-up in the UK and ran out of chicken. They ran this wonderful ad... 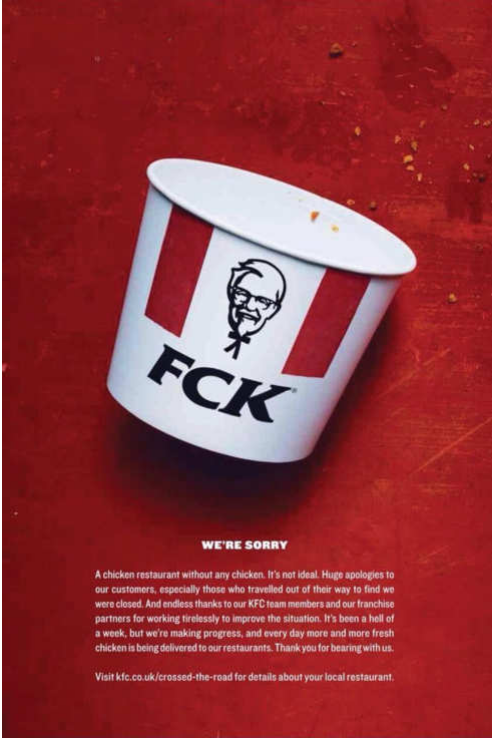 The ad has won all kinds of accolades and awards. And, as advertising successes often do, it is now becoming some kind of bullshit morality lesson about client-agency relations.

An article in MarketingWeek recently informed us that this particular success...


"...highlights the importance of having an agency that really understands a business. Mother had been KFC’s agency for less than a year when the crisis broke, but already felt fully integrated. That was possible because KFC immersed Mother in the brand, inviting it along to its restaurant general manager conference during the pitch, and within the first three months of working together taking the Mother team to its HQ for tastings, having them bread chicken in the kitchens and going to franchisee meetings."

Give me fcking break. The reason this ad exists is that someone had a terrific fcking idea. It had less than nothing to do with breading a fcking chicken or going to fcking "franchisee meetings." It was talent that created this ad, the rest is footnotes.

Believe me, I've been to about all the "general manager conferences" and "franchisee meetings" one human being can safely attend without spontaneously combusting. If there's anything in the world that will cause a saint to knock over an old lady's wheelchair it's a fcking franchisee meeting.

KFC's marketing honcho had this to say...


"...seeing agencies as 'real business partners' has been key to the success of the relationship. All its agencies are fully integrated and tasked with working with each other and the KFC marketing team, while KFC invests time and budget in the relationship, holding quarterly breakfasts with agency heads and agency recognition nights, for example."

Oh, puh-leeze. How many times do we have to hear this trite horseshit until we realize that creativity does not spring from quarterly breakfasts. It comes from one place only -- talented people. Take a crappy agency and feed them all the breakfasts and recognition nights you want and you'll still get crap.

Now don't get me wrong, I'm all for agencies and clients working together as closely as possible. I am also all for agencies being treated with respect and held in high regard. And I commend KFC for this.

What I am against is the fantasy that creativity is the result of group hugs and harmonious collaborations. You want creativity? Hire talent. End of story.

I will leave the last deliciously cynical word on this subject to one of the most brilliant minds our industry has ever produced -- the great Howard Gossage: "Never tour the factory. Never taste the product."

A Certain Type Of Imbecile


There is a certain type of imbecile who can't see anything other than what is right in front of him. He has no peripheral vision and no rear view mirror.

He thinks that "disruption" is a new thing. He has no idea that progress has always meant that old technology would give way to new technology. He thinks this is new.

He has no idea that things are always changing but that change is rarely cataclysmic. He thinks that every new technology will "change everything."

Actually, he is not astonished, surprised, amazed, or astounded by any of this. He just denies it.

For some reason that is not clear to me, this type of imbecile has found a warm and welcoming home in the advertising and marketing industries. He is not just accepted here, he is celebrated.

He makes speeches and is quoted. He lives in a comfortable world where today's facts don't matter and his hyperbolic vision of "the future" is always home.

He is like a child with no perspective and an inclination to jump from one obsession to another. Yesterday he was lecturing us about millennials, today he is hyperventilating about Gen Z's. Yesterday he was pontificating about native advertising, today he's all over blockchain. He knows nothing, but has a trendy platitude about everything.

He is our new prophet. And you better be careful -- he may be an imbecile, but he's in charge.