For years anyone with a brain has known that Facebook "metrics" are a joke. They make shit up, imbeciles at agencies believe it, dimwit clients fund it, and - bingo - more ad money. Most famously, not long ago they inflated video viewing time on their site by as much as 80%.

Recently in my newsletter, I recounted this story...

Facebook "metrics" have a long illustrious history of being laughable bullshit. Anyone who believes their numbers is an idiot. Here's a lovely example.

According to a recently published report, Facebook says they reach 1.5 million Swedes between the ages of 15 and 24. The  problem here is that Sweden only has 1.2 million of 'em. If Facebook reached 100% of them, they'd still be 300,000 short. Sometimes I think Facebook's calculations are done by bloggers.

But today we have something even more delicious.

According to Brian Wieser of Pivotal Research Group, one of the industry's most respected media analysts, Facebook is at it again.

Facebook's Ads Manager says that the website is capable of reaching 41 million Americans between the ages of 18 and 24. The problem is there are only 31 million Americans of that age. But hey, what's 10 million people here or there? 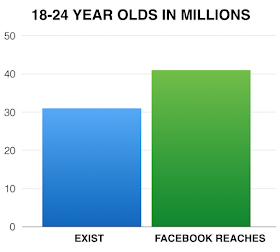 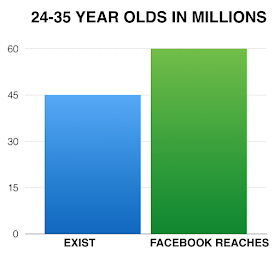 So it looks like, if your media target is the highly coveted imaginary American between the ages of 18-34, Facebook is the medium for you.

We always knew that Facebook was an amazing company, but their ability to reach non-existent people sets a new standard for the online ad industry -- which has always prided itself in imaginary advertising accomplishments.


"They are designed to estimate how many people in a given area are eligible to see an ad a business might run. They are not designed to match population or census estimates."