As we've all been told a thousand times by marketing and media geniuses, television is dead. Here are a few examples:


Business Insider: "The Death Of TV As We've Known It Is Finally Here"

Forbes: "Why Television Is Dead"

Tragically, here at the Ketel One Conference Center overlooking the campus of The Ad Contrarian world headquarters, we've been a little negligent recently in chronicling the death of television. So today we're going to do a little catching up.

Nielsen just released its Total Audience Report for the second quarter of 2016, so let's have a look at how the dead are doing:

•    They spent more time listening to radio than they did connected on a smart phone. 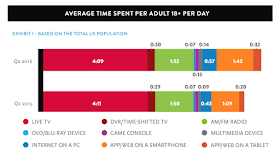 Of course, listening to our chattering experts you'd never know any of these facts because... well, let's be honest here... because mostly all they're capable of doing is listening to each other babble and then repeating it.

OK, so maybe TV isn't quite dead yet but it's certainly dying quickly, right? Here's proof:


Business Insider, "TV Is Dying, And Here Are The Stats To Prove It."

The Motley Fool: "It's Official. The TV Industry Is Dying."

Money, Inc: "Need Proof That Cable TV Is Dying? This One Stat Trumps Them All."

Except... live TV viewing fell from 4 hours and 11 minutes last year to an alarming 4 hours and 9 minutes this year.

When you consider the quantity and range of incredible new media options that are available, there is one crystal clear truth that the clueless lemmings in the marketing and media world have completely misread -- the stunning resilience of television.