We know that fraud is a major problem for online advertisers. But we don't know how big a problem it is. Estimates range from 2% to 90% -- which is another way of saying we have no fucking idea.

The ANA (Association of National Advertisers) estimates that ad fraud will cost marketers $7.2 billion this year. But this estimate is based on assumptions that are imprecise at best. If any of the assumptions baked into this estimate is incorrect or inaccurate, the number could go up or down dramatically.

The $7.2 billion number represents about 5% of worldwide online ad spending. To give you an example of how fuzzy this number is, the WFA (World Federation of Advertisers) says that the actual amount of fraud could easily be 30% -- or six times this.

Believe it or not, if fraud accounts for just 10% of the online advertising system, in 9 years ad fraud will be the second largest source of criminal activity in the world, second only to drug trafficking.

And ad fraud carries with it almost no risk. According to Hewlett-Packard Enterprises, ad fraud has a higher payout potential and lower risk factor than any other type of online crime.

The scary part is that according to knowledgeable people, organized crime is not yet a major player in ad fraud. With so much money there for the taking, it is only a matter of time.

We might assume that the big gainers from online ad fraud are the criminals themselves. But according to the WFA, the group that gains the most is actually the legitimate marketing industry.

Below you'll see a chart which shows how money flows through the ad fraud "ecosystem." I'm not going to pretend for a minute that I understand all this stuff, but the key point is that most of the money that is being extracted from advertisers as a result of ad fraud is done by the marketing industry before the crooks enter the picture (click on the chart to read it better.) 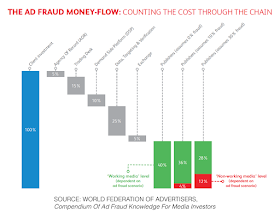 The more skin an agency or agency holding company has in the "money-flow" chain (e.g., agency of record; trading desk; DSP; ad tech provider, etc) the greater is its potential for revenue derived indirectly from ad fraud.

In fact, as far as agencies and other marketing entities are concerned, fraud seems to add to their revenue stream.

This is not to say that agencies or marketing companies are complicit in ad fraud, but it is to say that they are inadvertently some of its biggest beneficiaries.

One can only wonder how much more seriously ad fraud remediation would be taken if the unintentional beneficiaries were being punished instead of rewarded.
Share