The Wrong Thing For The Right Reason


Last week I wrote a post called Why I Lied about a failure of character when, for reasons of "self-preservation," I stayed quiet and intentionally let a client misconstrue a fact.

In response to my post, I received an email from one of my former partners -- the great Sharon Krinsky.

Sharon reminded me that there was more to it, and that sometimes independent agency owners have to do the wrong thing for the right reason:

"I don't think you were completely honest.

The reason you stayed quiet was AGENCY preservation, not "self preservation."  The same reason (sane, smart, successful) agency owners the world over don't flip their shit each and every time someone opens their stupid fucking pie hole and says or does something completely fucking stupid. Which is shockingly often.

Agency owners have tens (and, if they're lucky, hundreds) of people counting on them for their livelihoods. The right thing isn't always the rightest thing.

You taught me that."

Whether you run an agency, a bakery, or just a family, the price for getting up on your high horse and enjoying the catharsis of airing the truth as you see it is often high -- and paid by someone else.

It's the rare agency owner who foolishly shot his mouth off and then fired himself.

One of the great joys of being out of the agency business is the freedom to say whatever the hell I want, and not having to worry that innocent bystanders and their families will be paying the price.

And speaking of saying whatever the hell I want...
... Tomorrow, Nov. 19, I will be speaking in Chicago at The Escape Pod, courtesy of the great Vinny Warren. Everyone's invited. 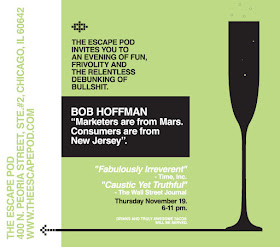